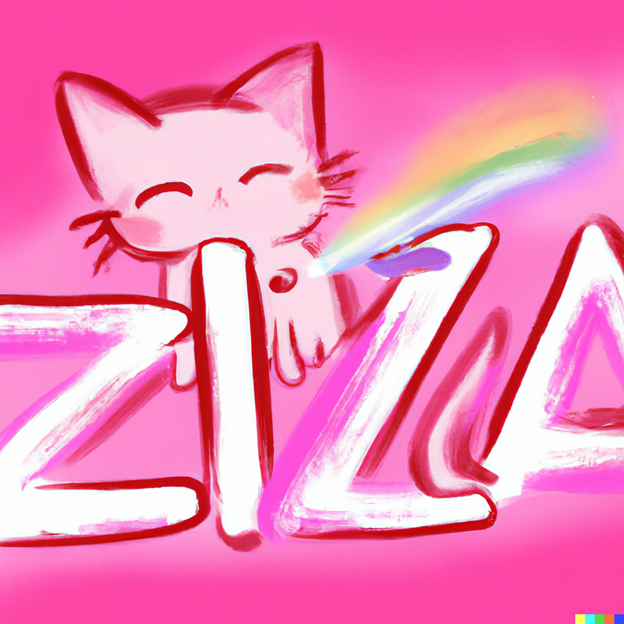 “A cat and a dog pooping on a book that is pink.”

Sure, maybe it wasn’t the best idea to let my eight-year-old sit down with me late at night and burn through my first batch of search credits on Dall-E 2, OpenAI’s AI-powered image generation app.

I combed through my search results.­­

First, there were all the results where I tried like hell to get it to make pictures that included my daughter’s name and didn’t get anywhere.

Then, I tried a riff on a joke – “a priest, a rabbi, and an advertising executive walk into a bar”…

And then another entry specifying gender.

And then came my daughter’s very first Dall-E search, “a blue cat sweating in a microwave.”

This was before I showed her what it was and just asked her to share, in as much detail as possible, anything in the world that she’d want a computer or the internet to turn into a picture. She said a cat, and when I pushed for something more specific, there it was.

The more we tried these, the more I was looking for meaning.

I tried understanding what AI thinks people imagine when they say a phrase like “the best day ever.” What can one possibly analyze about images like these?

Others had puppies. Adorable.

Then came ideas that fused theology with zoology.

…or a sea otter receiving divine inspiration from a burning bush.

Granted, DeMille’s Red Sea crossing scene would have been anticlimactic with a sea otter replacing Charlton Heston. “Just swim, you idiots! You can swim to freedom! It’s not even forbidden to eat shellfish yet!”

I then plumbed the darkest depths where no AI has gone before.

I asked Dall-E, that poor Dall-E which never did anything to offend me (beyond refusing to make cute pictures of my daughter’s name with cats and unicorns and rainbows), if it would dare show me an image of “what it’s really like working at an ad agency.”

You may wish to avert your eyes, dear reader, because you are not ready for the realism that Dall-E 2 unleashed.

It’s a scene that may make someone who is really working at an ad agency wonder if they are themselves in a simulation and this image might not in fact be of the real universe running AI experiments on us.

Yes, here is “what it’s really like working at an ad agency,” lest you be warned, dearest of dear readers.

I worked at no less than three ad agencies, and one or two other companies that thought somehow that calling themselves an agency would actually be good for their valuations, and now all of my memories will be of that image. That is the only real image of agency life that has ever been captured in two or more dimensions.

I come back to my daughter’s moment of bravery.

Here she was, testing the forefront of modern technology. This was a moment that perhaps she’d remember for the rest of her life, or I’d make her remember by writing an entire column about it.

She went down a dark path at first.

Why was that blue cat sweating in the microwave?

Was it using the microwave as a sauna?

Taking the Occam’s Razor approach, was someone microwaving the cat? If so, why?

One may reasonably ask why the cat is blue.

Did someone, inadvertently or advertently, put the cat in the freezer, and did that same someone proceed to think, wisely or unwisely, that the cat needed to thaw, perhaps on a defrost setting for an 8-lb mammal?

But then, just as I was reminding myself that my daughter is in fact way more conscientious toward her cats than I am, she threw out another idea.

“A cat and a dog pooping on a book that is pink.”

And what did Dall-E 2 tell me? 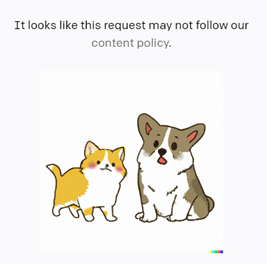 Indeed, what I found throughout my search barrage was a bizarre smattering of results that surprised me mostly by how often they missed the literal or intended meaning of what I queried.

I was looking for any kind of meaning at all from the serches. And I was also looking for shortcomings, like signs of sexism or racism or anti-Semitism.

Instead, I found countless photos that defied race and gender stereotypes and often took creative liberties I wouldn’t have expected.

Yet I’m also reminded of how nuanced even the most straightforward and seemingly simple requests are that I give to my creative team.

It then reminded me of a conversation I had recently with a casting director. They told me about the art of finding the perfect actors or models for a photo shoot where so much of the process doesn’t involve finding the perfect candidates so much as it involves reading the client’s mind.

What matters is not how good the image of a blue cat sweating in a microwave is but to what extent it evokes the kinds of emotions that the artist hoped to convey.

When my daughter tested the limits of Dall-E 2, it also reminded me that technology can be used responsibly. Sometimes, you can’t get what you’re looking for, and that’s a good thing.

I never want to see an image of “a cat and a dog pooping on a book that is pink.” Hell, I can’t watch my cats using their litter box. It’s disgusting. Dall-E 2 mercifully already knows that.

Yes, we will have deepfakes, and the next generations of AI are going to cause all kinds of trouble. Some creative roles will be threatened. This isn’t to dismiss all kinds of consequences intended and unintended that are heading our way.

But mix a sense of wonder with some guardrails that can stymie an eight-year-old (and her dad), and this one frontier of tech gives a sense of what’s both possible and responsible.

This article originally appeared in Serial Marketer. Photo by Girl with red hat on Unsplash.

The post How Not to Train Your AI appeared first on TheCustomer.