Given the elusive nature of brands, determining a brand’s financial value is a difficult task.

Despite a brand’s intangibility, it’s hard to deny just how effective a strong one can be at boosting a company’s bottom line.

A Full Breakdown of the Most Valuable Brands

With an increase of 35% since last year’s report, Apple retains its top spot on the ranking as the world’s most valuable brand, with a total brand value of $335.1 billion.

This is the highest brand value ever recorded in the history of the Global 500 report, which has been published each year since 2007.

As one of the world’s largest tech companies, Apple dominates the smartphone market, especially in the U.S., where more than 50% of operating smartphones are now an iPhone.

Here are the top 10 most valuable brands according to the report:

After Apple, coming in a close second is Amazon with a brand value of $350.3 billion. This is not surprising, considering the tech giant has often found itself neck-and-neck with Apple in the rankings, and has even come in first place in previous editions of the report.

One other brand worth highlighting is TikTok. The social media company saw a 215% increase in its brand value year-over-year, making it the fastest-growing brand on the entire list.

Between 2019 and 2021, the platform saw its userbase skyrocket, growing from 291.4 million to 655.9 million in just two years. If this growth continues, TikTok could reach nearly one billion users by 2025, according to projections from Insider Intelligence.

Over a third of the brands on the list fall into the tech and services sector. Combined, this category has a brand value of $2.0 trillion.

Media is the second most valuable sector—19% of the top 100 brands fall under the media and telecoms sector, including Google, Facebook, and WeChat.

COVID-19 is partly the reason for this, as media consumption increased throughout the global pandemic. For example, in the first nine months of 2021, Snapchat’s daily usage grew by 77%. Despite increased traction with users, it’s worth noting the company is now feeling the sting as the real world competes for attention spans once again and advertisers begin to ghost the app due to recession jitters.

As pandemic restrictions fade out around the world, and murmurs of a global recession threaten global economic growth, next year’s report could see some big shifts in brand value.

The Geography of Valuable Brands

When looking at where these brands are based, we see that the United States and China account for 73 of the top 100 brands on the ranking. Even more surprising—just six countries make up 94% of the list.

The growth of Chinese companies on the global stage is reflected in this visualization. As a point of comparison, a decade ago, only six Chinese companies made Brand Finance’s Top 100 ranking, and none of them were in the top 30 for brand value. 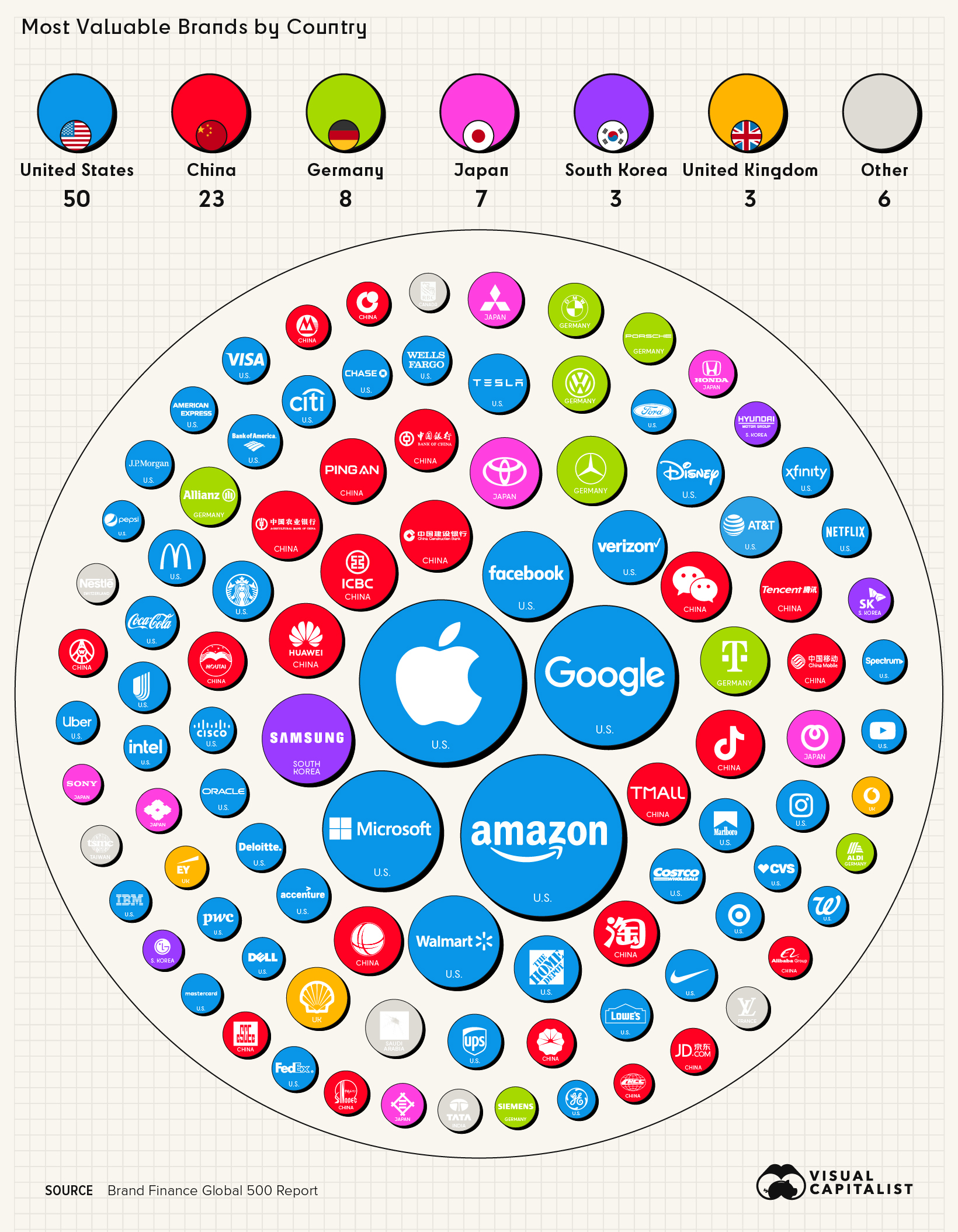 Interestingly, European countries only make up 14% of the list, which is a testament to just how much Europe’s economic dominance has dwindled over the last few decades.

Back in the 1960s, Europe accounted for nearly a third of the world’s total GDP. But by 2017, it had dropped down to 16%. According to a forecast by the Pardee Center of the University of Denver, the EU’s share of global GDP is expected to drop down to 10% by 2100.

Of course, if history has taught us anything, it’s that a lot can change over the span of a century. How a ranking like this will look in coming decades is anyone’s guess.

The complete list of the 100 most valuable brands and the original article can be found at Visual Capitalist.

The post The Top 100 Most Valuable Brands in 2022 appeared first on TheCustomer.